When I entered the room, I got handed over a usb stick with an archive named theinternet.zip (we’ll see what’s inside during the tutorial); the room is packed, the session is beginning in few minutes.

Coffee break : Pascal is announcing a book about tycho is coming soon (Yai!). 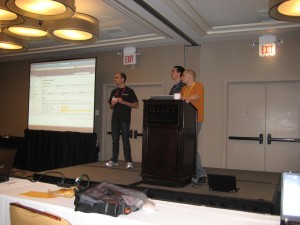 Great presentation & tutorial ! Kudos to Pascal, Jan, and Igor for sharing their knowledge and their patience during the tutorial !