This summer at Terracotta, we’ve been pretty busy working on making our test and build infrastructure more convenient for the developers.
In fact, Ludovic, Louis and myself used some of our innovation days (days offered by Terracotta we can spend working on projects we want) to create (and contribute to) plugins for Nexus, Maven, and also for Jenkins (well, this last one was not developed during innovation days, but still, there it is !)
These plugins are really useful to us, and since we’ve made them open source (Apache 2 license ), here I am giving you a quick introduction to those plugins (source, binaries and docs , hoping they’ll help you too ! (and also hoping you’ll contribute to them if you like them !

If you want to know what are the dependencies of your project, or what depends on your project, your company repository manager is probably the best place to find out; after all, all the binaries are published there; that’s why we chose to develop / contribute to Nexus plugins : 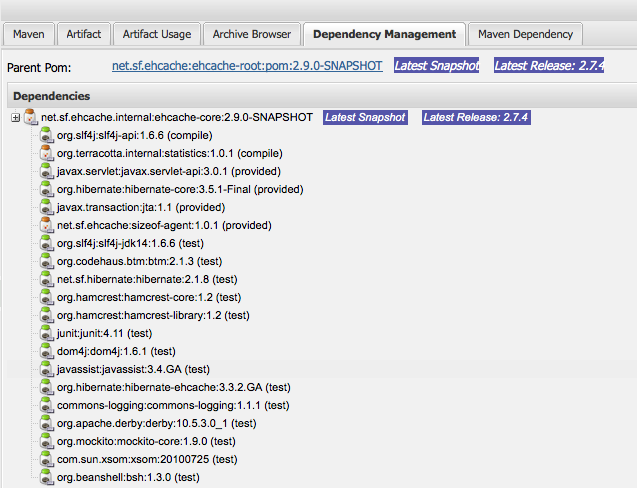 This maven plugin lists all the Junit tests of a maven module (classes and methods) annotated with a @Category ; sorted by category names.
So for example, if you type in your terminal :

When all Jenkins’ slaves are busy, wouldn’t you like to be able to launch the job you’re waiting after right now ? without adding it to a long queue ? without waiting for current jobs to complete ?
If your answer is yes, then the Accelerated Build Now plugin is for you !
The idea behind this plugin is that a user should not wait for automatically scheduled jobs to complete; his/her jobs should be the priority (and in the case the plugin needed to kill a running job scheduled automatically, it re schedules it).

The plugin code is hosted on Github, its binary is available directly from Jenkins update center (Jenkins-> Manage Jenkins -> Manage plugins) , and its wiki page is hosted on Jenkins Wiki

Uncomment some lines to have :

Then start nexus with :

Test your plugin without deploying it to a local Nexus

) to test any change.
From the Nexus team chat room, I got the following tip :
Just add :

to NEXUS_HOME/conf/nexus.properties , so that XmlNexusPluginRepository reloads your plugin at every save ! (provided you don’t change the methods signatures, in that case you will have to restart Nexus)